Who was Vaclav Chad?

Václav Chad was born on September 8, 1923 in Břeclav. His family soon moved to Otrokovice. In 1939, after finishing fifth grade at a secondary school in Uherské Hradiště, he was admitted to the School of Art in Zlín, recently established by the Baťa company, where he soon became a leading student figure. He mainly studied in the classes of R. Wiessner, Vl. Hroch and V. Makovský. The intoxicating world of an excellent young artist and a rebellious person, influenced by the spirit of the School of Art, mingled with an equally intense world behind the windows of the school. After graduating (1944) he went on to study at a special post-graduate school while working as a designer in the marketing department the Baťa Works. In October 1944 he joined the anti-fascist resistance and eventually led a conspiration group. When one of his friends was arrested by the Gestapo in February 1945, Zlín became a dangerous place for him; it was obvious that he was the next target and his friends advised him to hide. However, he did not listen to their advice and was arrested by the Gestapo in one of the boarding house buildings on the night of February 23, 1945. When he was leaving the building, accompanied by three members of the Gestapo, a few dozen meters from the School of Art, Václav Chad made ​the last free decision of his life. He decided to flee and was shot dead by the Gestapo.
Chad as an artist should be held in an equally high esteem as Chad the citizen. Although his work did not fully develop and reach its fulfilment, he left behind a special, completely original work, catching our attention with the sharpness of the view of its creator. A body of work that came into existence with knowledge of a lack of time, in less than five years. Despite the dangers of the Protectorate period (such as sudden raids of the school by the Gestapo), his work developed in close contact with the then banned modern art, at first especially with expressionism and cubism, but later also with surrealism. To commemorate the artist, the Regional Art Gallery annually awards the Václav Chad Award as part of the Zlín Salon exhibition. 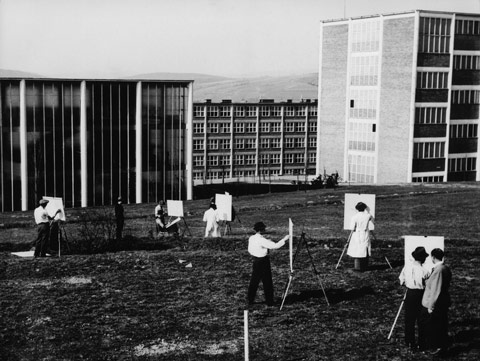